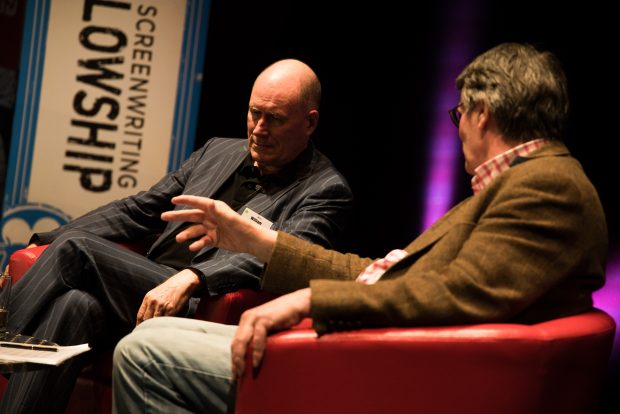 Creative Director Chris Jones and his amazing team did it again. They put on a superlative event that inspired, energised and empowered us to be the writers and filmmakers we want to be. This time it was bigger than ever: 800 enthusiastic delegates and 150 exceptional speakers. I’m surprised with so much creative talent concentrated in one place, we didn’t alter the earth’s magnetic field – it was that AWESOME.

An element of London Screenwriters’ Festival I particularly appreciate is the scriptchat. This is a roundtable discussion held immediately after a session where the speaker sits and chats with those members of the audience hardy enough to resist the lure of the refreshment tent or the imperative of a nature break.

In his scriptchat, Robert Thorogood, creator of the popular TV series “Death In Paradise”, told us he loves aphorisms. As someone who is rather partial to them myself, his comment inspired me to pick out and share my favourites from this year’s London Screenwriters’ Festival.

ROBERT THOROGOOD
“Here’s the good news: you’re as good a writer now as you’ll ever be.”
Robert recently dug out an old script from his bottom drawer (we’ve all got one) and was surprised by how well-written it was. What’s the difference between then and now? Aside from dogged perseverance and doing at least one thing every day to further his writing career, he’s found his voice. That, he says, is the most important thing, as it’s what sets you apart from every other writer out there.

JULIE GRAY
“Think of your writing as something that allows you to give as well as to get.”
If anybody was in any doubt as to the value of storytelling and storytellers to the human race, Julie will have set them right in her uplifting session on writing with purpose. Julie reminded us to live and write purposefully, on purpose. It shouldn’t ever be just about the dosh. Being a writer is a calling, she says, you are a giver of hope, not a taker of money.

NICK POWELL
“A story becomes your story as soon as you start to tell it.”
Nick entertained and regaled us with stories from the filmmaking trenches in his extraordinary A to Z of Storytelling. He’s on first-name terms with just about every screenwriting god you’d care to mention and mixed up his own insights with gems from the likes of Martin Scorsese, Tom Stoppard, Steven Soderbergh and Quentin Tarantino.

LINDA ARONSON
“Storytelling is about truth and its different versions.”
Linda wowed us with her mastery of every imaginable permutation of non-linear storytelling. The theory was accompanied by lots of practical advice as to how to apply these tricky techniques to our own stories to energise and lift them. It’s crucial all writers young audiences don’t take as long to “get it” as they used to, so we need to tell our stories faster and include more beats per story.

WILLIAM NICHOLSON
“A lot of story has no spoken words at all.”
This from the man who wrote one of cinema’s immortal lines, “what we do in life echoes in eternity.” (I can’t get over how great that line is. If I ever write one half as good, I’ll die happy.) William was of course referring to the old “show don’t tell” adage and extolling the virtue of visual storytelling.

TED TALLY
“Confusing the audience for three minutes is better than boring them for three seconds.”
Screenwriters invest a lot of time and trouble to learn the rules of screenwriting. Here’s more good news: once you know the rules, you can break them – if it serves your story. But there’s one rule you can never, ever break and that’s this one: don’t bore the audience!

JOEL SCHUMACHER
“We are most destructive when we don’t realise filmmaking is a collaboration.”
Besides being the most dapper man at the Festival, Joel Schumacher impressed us all with his wit, charm and generosity. From his script-to-screen session to the review of his career in film, he had us all wrapt and enchanted. It was touching to see him on stage with the real Philomena Lee, who graciously accepted the inaugural British Screenwriters’ Award for Best British Feature Film Writing on behalf of Steve Coogan and Jeff Pope for “Philomena”.

LEE JESSUP
“Never walk into a meeting unprepared. Approach pitching as networking.”
Lee Jessup’s structured, no-nonsense approach to making it in Hollywood had us all wishing we’d met her a year earlier, if not sooner… If you want to make it in Hollywood, no matter where you live, all you’ve got to do is get noticed. Lee then delighted us by giving us some very doable suggestions as to how to go about it.

AMMA ASSANTE
“ ‘No’ is followed by a comma, not a full-stop.”
Amma’s story of being robbed of the credit for her words is heart-breaking, yet the way she overcame this set-back is inspiring. What struck me is how she defines herself first and foremost as a writer. (Yay! She’s one of us!) Had she known what would happen, she says, despite the tremendous benefits directing “Belle” has brought her, she would not have gone ahead with the project. Now that’s artistic integrity for you.

CHRIS JONES & JONATHAN NEWMAN
“The only failure is not doing something; everything else is a learning experience.”
“Free your mind,” says Morpheus to Neo in “The Matrix”. The Manifesting Success session was all about recognising that the person running us is our five-year-old self and that our inner voice, which tends to be negative, is not reality. Here again there is good news: we can choose not to listen. The ultimate reality is doing, so say what you are going to do and have the integrity to do what you say. That way success lies – whatever success means to you.

All that remains to be said after this whistle-stop tour of some of the highlights of my #LondonSWF 2014 is a heartfelt THANK YOU to Chris, the team, the volunteers, the speakers and the delegates. Let’s do it all over again next year!