As a writer, director and producer – but, of course, primarily a writer – Christopher Hampton offers a uniquely rounded perspective on the different disciplines behind the camera. What really comes across in this session is an empathy towards the demands and needs of differing talents – an appreciation that everyone is different, each to his/her own method and no one is wrong. Which, in the best possible sense, a nicer way of expressing William Goldman’s time-honoured mantra “Nobody knows anything”.

One of the biggest creative minefields that must exist in the world of the professional screenwriter is that between the author of an existing property and the screenwriter who has been hired to adapt their work for the cinema. Hampton talks here about his relationship with Ian McEwan, the author of ATONEMENT, himself no stranger to screenwriting having adapted several of his own works (THE INNOCENT; ON CHESIL BEECH; THE CHILDREN ACT). He expresses a mix of surprise and honour that McEwan therefore consented to Hampton adapting Atonement, ensuring that he treated the project with due reverence.

Of course, this does not preclude the need for structural change in the process of adapting. It’s commonly held that what a screenwriter must do when adapting a novel is to pull it apart entirely and then rebuild something new from it. But there is a difference between carelessly tossing those component parts to the wind and carefully reconstructing them in such a way that the end result feels a satisfying representation of the original work. Hampton makes clear that with Atonement he aimed for and achieved the latter. The greatest testament to his success in doing this is the fact that while McEwan made himself helpfully available during the early stages of the adaptation, by the end of the process his presence simply melted away. Such was the trust that he had developed for the way Hampton was handling his work.

No stranger to calling the shots himself (CARRINGTON; THE SECRET AGENT; IMAGINING ARGENTINA), Hampton is well-placed to observe the varied approach that different directors take to working with screenwriters. And he passes judgement on none of them – able to adapt his method and terms of work accordingly.

He contrasts working with Stephen Frears – with whom he has an almost symbiotic connection – with a young thruster like Joe Wright. While Frears was comfortable having Hampton alongside him on set, Wright was clearly less so. As a veteran, Hampton took no slight from Wright’s approach (and none was intended) – as this is pretty much the norm in big screen production anyhow. Hampton consciously absented himself from the set, showing the same trust and respect to Wright in his helming of Atonement that Ian McEwan had shown to himself during the story adaptation.

Hampton’s scripts have been performed by many of the most celebrated stars of the past four decades: Vanessa Redgrave, John Malkovich, Julia Roberts, Gerard Depardieu, Christian Bale, Glenn Close, Emma Thompson, Olivia Colman, Michelle Pfeiffer and Michael Fassbender to name a few. In this session he talks about the challenges he’s faced in writing for specific talents and problematic roles. For example, the character of young Briony Tallis in Atonement, which were spread across her age as a pre-pubescent 12 year old to a young adult of 18. In order to achieve consistency and continuity of character, it was decided that a single actor would be required to bridge that considerable age span (with Vanessa Redgrave to play the much older Briony). The production struck gold in casting a 13 year old Saiorse Ronan to deliver that performance.

Hampton takes a philosophical view on the pitfalls of ‘writing for’ talent who are subsequently unable to play the part. Having experienced this, he reflects that the desired actor has done their part by providing the guiding voice in Hampton’s head while writing the part – making it much easier to cast an equivalent talent in their stead. 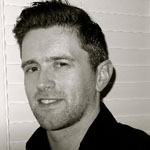 Nick Boocock is a screenwriter and producer whose past credits include developing factual content for presenters Ben Fogle and Anita Rani. A previous winner of the Euroscript Screen Story competition, he currently works for BAFTA and also writes for the Amazon Prime-distributed short form series LILLY’S LONDON.
Twitter:@nickboocock