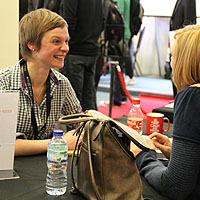 So, you’re coming to LSF! Congrats. This event is put on by writers FOR writers, so we want you to be able to harness the opportunities available here and to propel your writing career forward.

Every year delegates ask how to get the most out of LondonSWF, so we asked blogger, script editor and networker extraordinnaire Lucy V to give us her top 7 tips for grabbing LSF by the horns … strap yourself in! 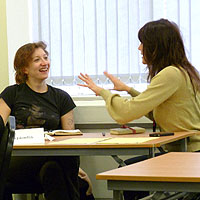 Make sure you study the schedule. When deciding which sessions to watch “live”, consider what’s going on at the same time – remember, most sessions are filmed, so it’s not “either/or” and you needn’t miss out altogether.

What’s more, some of the VERY popular sessions (especially those with headliners) will be packed out; in contrast some smaller sessions may bring more value to you “in the flesh” because less people will be there, meaning you may get some individual attention from the speaker/s, especially via Q&As.

In addition, consider the value of networking within small groups when others are in sessions. I’ve lost count of the number of people who’ve told me, “If I’d gone to see X, I’d never have met Y and now we’re working together on a project!” More on networking, next. 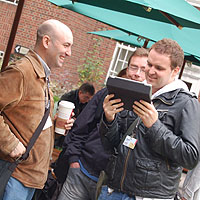 Lots of writers worry about approaching people at events, or believe erroneously that their fellow writers are not useful to them.

Dealing first with 1), remember everyone is in the same boat. Do not huddle together with the people you know, or sit on your own. Try and mingle wherever possible. If you’re not sure how to start conversations, here’s 10 easy questions to break the ice:

Dealing with number 2), your writer colleagues are your greatest allies – never forget this. Don’t ignore everyone in the hope of catching Joe Eszterhas at the bar, or harangue your colleagues into hearing your practice pitch either.

The more conversations you have, the more likely you will be remembered for the RIGHT reasons … For example: I went to a party, years and years ago. I was writing a horror screenplay and whilst networking, told my logline to about 5 people. By the end of the night, a young producer (whose path I had NOT crossed that night), came over to me and said:

“I hear you have a horror screenplay?”

That horror feature lead to one of my first paid writing assignments. Now, let’s rewind and imagine I’d said to other writers, “Oh this and that” when they’d asked what I was working on. That’s right: that producer, who’d been going round asking who had horror scripts, would never have been told by those writers I’D told that I had one. Talk about a no-brainer. 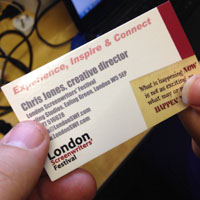 Have some. Do not even THINK of attending LondonSWF without any.

Social media handles/links to CVs, showreels etc are optional. I always include my Twitter.

Avoid funky fonts, overly flashy or shiny cards – remember people will have trouble remembering who is who, so will probably want to write reminders on the back of cards, so make sure there is a blank bit where they can do this.

DO NOT have those itty bitty cards, oversized ones or round ones or whatever. These get lost far too easily.

IN AN EMERGENCY: if you have no business cards or run out during the festival, whip out your phone and ask the person in front of you who they are on Twitter. Follow them immediately. Create a list of people you meet at LondonSWF this way. Not on Twitter? SIGN UP NOW. 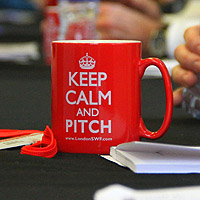 Let’s face it: for a lot of LSF delegates, it’s all about the pitching. And why not: LSF opens up a plethora of potential opportunities for writers, all in one place. What’s not to like about that!

So, a few things to remember when pitching, especially in the pitchfest:

And another thing lieutenant: Give one pagers to your pitchees only if they ASK for them and never, ever foist an entire script on them – or anything else like USB sticks, CDs or photos/props and especially gifts, even if you mean well: it can get really weird. If you have something you want to give someone – my Bang2writers have brought me chocolate in previous festivals for example – give it them in the refectory or similar, not a pitching situation!

Also, make sure you know your logline INSIDE OUT and can deliver it CONVERSATIONALLY and deliver it to all who ask, whether you’re pitching it formally or not.  Remember, a logline is a short description of the plot of your story. Whatever you do, do NOT confuse a logline with a tagline, which is the strapline on the front of a poster or DVD box, ie. “In Space No One Can Hear You Scream.”

Want to meet someone specific at LondonSWF? The advice is simple:

Email him/her before the festival and arrange IN ADVANCE.

This advice applies whether it’s a fellow tweeter or an industry pro, btw. What’s the worst that can happen? S/he says no, too busy. You’ve lost nothing.

If that person emails back and says yes, they’d be delighted to accept your invitation for coffee, be sure to pick a SPECIFIC TIME AND DATE. I’ve lost count of the number of times Bang2writers have said, “Let’s have coffee at LSF!” and I’ve said yes, only to not see them ONCE, despite sitting in communal areas for ages (as I always do).  FYI – If you don’t make an appointment with me, that’s fine – tweet me as @Bang2write, and I’ll try and make it to se you. DON’T email, DM or PM me please, these don’t always come through in time.

If you’re not on Twitter, check out the tweet board in Herringham Hall. I and other speakers will be using the #LondonSWF hashtag too and mentioning where we are at various intervals, which will flash up on screen. 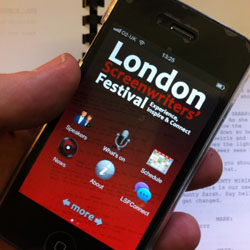 Leave your hotel in plenty of time. Each day of the festival starts around 9am, so be sure to arrive before this; lots of LSF delegates like to have breakfast or coffee together in the refectory around 8am. Each day finishes around 7.30pm officially, though there’s opportunity to network in the bar ‘til late into the night.

Some delegates have to leave earlier than others on the Sunday (especially those with childcare duties, like me), but if you can try and stay for Chris Jones’ closing speech which is usually around 6pm and lasts half an hour, it’s a great, positive way to round off the event. 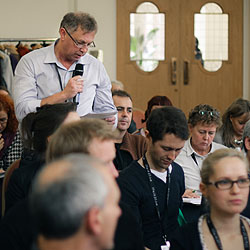 Some of the most popular sessions can and WILL get maxxed out – and LSF will not be able to let you in to oversubscribed sessions for health and safety reasons, even if you DO “just sit at the back on the floor”. So if there is a session you are DESPERATE to see first hand, make sure you get there as early as possible.

Be sociable. Live tweeting is a thing and we encourage delegates to use the #LondonSWF hashtag and share their new found knowledge and insights from the event itself in real time. But do make sure your mobiles are on silent so if they ring, it doesn’t disrupt anything. Equally, those on either side of live tweeters? Don’t accuse them of not listening, or typing too loudly! 😉

Do note volunteers and LSF staff will come in and out of sessions as we try and ensure the smooth running of the event for you behind the scenes. This will be done with the least amount of disruption possible, so please bear with us, thank you.

It can be very tempting to have a few jars as Dutch Courage, but try not to get drunk at the festival. You’ll probably be OK and not offend anyone, spew on anybody or make anyone think you’re odd, but is it worth the risk?

Remember, it’s a small pond. Try not slag anyone off. You never know who knows who. This includes various TV programmes, movies, etc. It’s just not worth it.  No one says you have to tell lies about how much you loved a piece of work if you didn’t, but be positive or risk looking like an amateur.

Decide what you want … and go get it, tiger! Just remember your loglines, your business cards and don’t be a div. It’s all about making connections and forging those all-important relationships. Good luck!