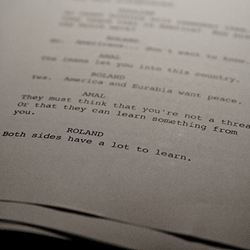 I’m a script reader. Unsurprisingly, that means I read a lot of screenplays. Yet it ALWAYS surprises me how few writers realise they’re supposed to be writing a VISUAL medium.

Here’s the top 5 ways writers screw up on visuals:

1) They don’t write an opener.

Here’s how the majority of screenplays or even scenes begin:

[Character] walks into a room/ down the road/ into a shop etc.

Not. Even. Joking. How dull? Answer: very. And yes, every single scene should start somewhere INTERESTING by the way. For more groan-worthy openers, check out this post: http://bit.ly/QW1ROI

SOLUTION: Always think, “what is the most interesting IMAGE I can open this screenplay or scene on?”

2) They write chains of dialogue.

C’mon, this is an obvious one. We’re SCREENwriters, remember; characters are not what they say, but what they DO and all that jazz. For more, check out “An Ounce of Behaviour Is Worth A Pound of Words” by Daniel Martin Eckhart: http://bit.ly/16ggfvW

SOLUTION: Never let scenes “run away” with dialogue. Focus on what you want out of a scene and how it contributes to the narrative arc, then set yourself a limit on how much a character is “allowed” to speak in achieving that.

Black on the page: the scourge of all script readers! But it’s a specific *kind* of black – the overwritten kind. Believe it or not, a writer can get away with quite a lot of description as long as it REVEALS CHARACTER and/or PUSHES STORY FORWARD. What they cannot get away with: writing a screenplay like it’s a novel. Which is yours? More: 10 Ways To Revitalise Your Scene Description http://bit.ly/ZEMvFX

SOLUTION: Make every word count. Use white space to break up potential problem areas and weigh up carefully what is needed. Far better to “sum up” a scene or character with a few carefully chosen visual items, than include every last detail of what’s on the mantelpiece or a laundry list of what they’re wearing.

4) They are too vanilla.

NEWSFLASH: script readers don’t want every screenwriter to be the same. They want a sense ONLY YOU can write this screenplay, or tell this story. They want to be excited by your unique storytelling ability aka your “voice”. Contrary to popular belief, it is not only allowed, it is DESIRABLE – put simply, those writers who “make it” are always those with their own voice. More on showcasing your voice, here: http://bit.ly/1dNzRIV

SOLUTION: As Jules opined in PULP FICTION, “a little personality goes a long way” … Just make sure your personality is on the page in a VISUAL way and your writing stands its best chance of getting noticed.

5) They play it safe with their characters.

There’s lots of reasons writers play it safe with their characterisation, but there are two reasons I see over and over again:

i)        The writers love their characters too much. Look, I get it. This character is your baby. You don’t want to be a bad parent and put him/her through the mill. But you have to. We don’t watch movies and TV about characters who sit around drinking lovely cups of tea and having a nice chat. We sign up for the juicy stuff: life/death stakes; betrayal; horror; humiliation and so on. This means that if you want your baby to see the light of day? You gotta subject him/her to some serious shit, for whatever reason.

ii)      They’re afraid of offending someone. As we “grow up” as writers, we realise that audience perception matters … without an audience, we are shouting into the wind. However, an audience does not always appreciate that is best for the story and what they LIKE is not always the same thing and sometimes the more experienced writer ends up paralysed by the fear s/he will offend someone is in their intended audience. I’m not suggesting that being controversial is a prerequisite for success (though this works for some writers), but we also need to realise that intent is key. Just as few filmmakers set out to deliberately offend their audiences, there is a small contingent of our audiences who set out to BE offended … In truth, we cannot please everyone. It is just not possible.

Read more on this subject: Top 5 Ways Writers Screw Up Their Characters http://bit.ly/12HIemL

SOLUTION: Realise your character must have the WORST time to provoke the potentially BEST response in your intended audience. In providing that terrible time then, think of the most visual places you could inflict pain and suffering on your character. A house? Boring. An empty factory? Better. A derelict church? Better. And so on.

Think openers; think focused; think lean; think personality; think location. Give us a sense of WHERE we are in the story and WHY … Never let yourself off the hook and having characters simply sitting down, or walking around, or talking for pages and pages. If you wanted to be a playwright, you’d be writing for the stage. You’re writing for the SCREEN. Never forget that.

BIO: Lucy V Hay is a script editor, novelist and blogger who helps writers via her Bang2write consultancy. Lucy is author of the book, WRITING AND SELLING THRILLER SCREENPLAYS (Creative Essentials). Check out her books.