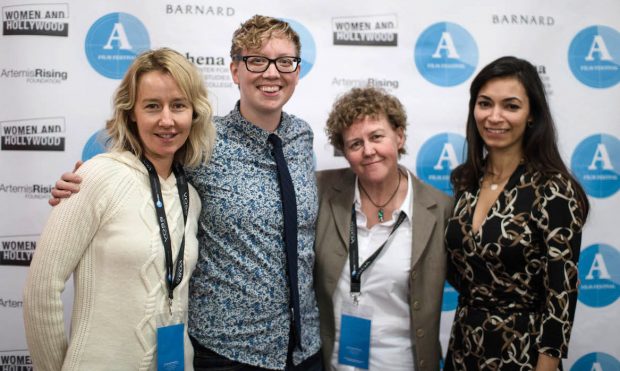 Being one of the four screenwriters selected for the inaugural Black List/Athena Film Festival Mini-lab in New York was an amazing experience. No blog post could really do it justice but you can go to the links below for more detailed posts written by previous Mini-lab writers. I’ll try to give you a flavour of what it was like for me here.

We read each others screenplays before being brought together in an intensive workshop (food and drinks were constantly on tap, including breakfast, so we didn’t need to leave the room). Our highly experienced workshop leader, Scott Myers, had read all the scripts and as a group we dug deep into story, character and how to deal with Industry level notes.

One-to-one phases followed where each writer rotated to spend time with Industry mentors who had all also read our scripts. Each mentor gave me incredible positive feedback on my writing and some food for thought on my screenplay and we worked though some of their own processes for filtering notes.

Finally, a four hour round table back with Scott where we brainstormed each other’s screenplays and our mentor’s notes to identify what resonated with us and how to address that. This whole experience did wonders for my confidence and solidified my belief that I belong ‘in the room’.

All this interspersed with evening social events and two further days at the festival with all access passes into films, panels and closed ‘invitation only’ events where we got to do some quality networking. Amongst many talented filmmakers, I chatted to Alysia Reiner (Orange is the New Black) and had breakfast sat talking with The Honourable Sarah Gavron, director of Suffragette and Brick Lane, how cool is that?!!

However, the thing that struck me most was this; at the Thursday night awards gala, I introduced one of my talented but networking shy fellow writers to a young development executive from an A-List production company. I’d had a positive meeting with that same executive earlier in the week regarding my own writing.

The executive was at the festival as her own screenplay was on last year’s Athena list and was being table read in public for the first time by the actors who will be in the film. I left them two of them to chat and that meeting resulted in a script request for the writer.

At the Friday night Filmmakers Reception I was introduced to the lovely Sarah by the equally lovely Festival CEO. Sarah was there to receive an award for ‘Suffragette’ and was very open and supportive of me and my writing. The next day at the Filmmakers Breakfast that same young executive was somewhat shy of talking to Sarah, so I introduced her and left them to talk. The young exec was over the moon to have connected and that Sarah had changed her plans to come to the table read. 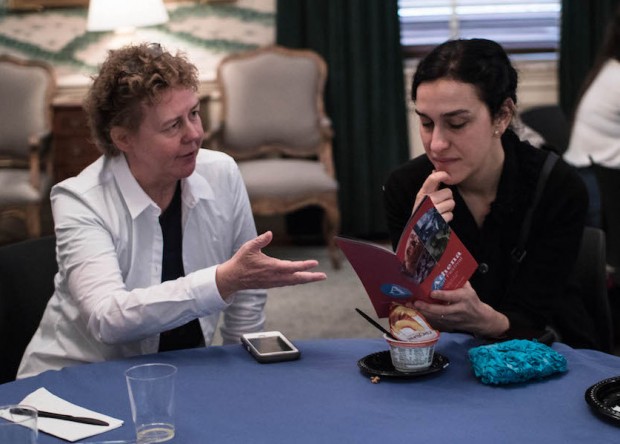 I was complimented on my confidence and at being a ‘smooth operator’ but I don’t think I am. I’m quite a shy person really. However, as Chris Jones extols at LSF, ‘facing my fears and doing it anyway’ is undoubtedly easier due to my Navy background. Networking is something I seem to ‘get’ and, after 5 years of attending LSF and my recent Talent Campus experience, I had done this quite naturally.

So, the lesson to take away from this: we are all ‘in the room’ at some point with and feeling without ‘the power’, and (wrongly) thinking we don’t really belong there. We must overcome that to make connections for the future, but it’s never just about us, it’s also about ‘the room’.

I think it’s true that by helping others we help ourselves. I get immense pleasure in connecting people if I can because we are all in this together. Film is a collaborative medium and it starts at this level.

That old adage of “it’s not what you know it’s who you know” is partially true in that if you create those positive connections, one day that might just make a difference. You are therefore making your own ‘luck’. You just have to be ready to make the most of that opportunity when it happens, and that means writing damned good screenplays for when you are asked to send something.

But we need get out there and create those connections by attending local and national Industry events, film festivals, networking evenings and the like. And if networking is new to you or something you are shy of, the London Screenwriters Festival offers you a highly supportive environment to in which to meet and connect with like minded individuals.

So now it’s back to the writing for me, taking all that I learned and putting it to best use because at the end of the day it is only the writing we can truly control and you have to have the ammunition ready for when the order is given to fire at your target.

Bio: British Screenwriter Dee Chilton, successfully navigated being a woman in a man’s world to rise from the lowest Rank to Commissioned Officer in the Royal Navy. Recent successes as a screenwriter include being an Academy Nicholl Screenwriting Fellowships semifinalist, Austin Film Festival second rounder and Stage 32 New Blood competition Winner. Her screenplay ‘Darken Ship’ was included in the ‘Blood List’ has achieved high ratings on the ‘Black List’ website from where she was selected as one of the four writers invited to take part in the inaugural Black List/Athena Film Festival Mini-lab in New York.