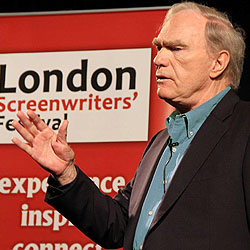 “Literary talent is not enough. If you cannot tell a story, all those beautiful images and subtleties of dialogue that you spent months and months perfecting waste the paper they’re written on. What we create for the world, what it demands of us, is story. Now and forever.”
Robert McKee
STORY

Robert McKee, a Fulbright Scholar, is the most sought-after screenwriting lecturer around the globe. He has dedicated the last 30 years to educating and mentoring screenwriters, novelists, playwrights, poets, documentary makers, producers and directors internationally.

Those who have learned from McKee have called him “the Aristotle of our time” because of his insight into the substance, structure, style and principles of the grand art of story.

Peter Jackson (writer/director of The Lord of the Rings trilogy and The Hobbit) has lauded him as ‘The guru of gurus.’ For the writers of Pixar (creators of Toy Story 1, 2 & 3 and Finding Nemo), McKee’s STORY Seminar is a rite of passage.

A BAFTA winner and nominee for his popular Channel 4 series Reel Secrets, McKee also wrote and hosted 12 episodes of BBC’s Filmworks series. He was profiled by Bob Simon of 60 Minutes for CBS news, and portrayed by Emmy Award winner Brian Cox in the Oscar-nominated film Adaptation. In 2017, McKee was inducted into the Hall of Fame at the annual Final Draft Awards.

This year, in recognition of McKee’s lifelong dedication and  invaluable contribution  to writing communities around  the globe, Regent’s University, London have announced the launch of the Robert McKee International Screenwriting Scholarship.

WANT TO LEARN FROM MCKEE?

Robert McKee returns to Regent’s University, London to deliver his legendary 3-day STORY Seminar (May 17th-19th) and 1-day deep dive in to what McKee calls ‘The Angry Art’, Comedy Day (May 20th). Don’t miss your chance to create your own cinematic, theatrical or literary masterpiece and join the growing faction of award winning writers.

Take advantage of a lifetime of narrative insight and master the principles of story form with the teacher Hollywood legend Quincy Jones calls “the Aristotle of our time.” 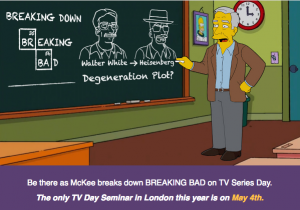 Year after year, McKee Alumni are recognised as the best artists in the business. With over 65 Oscars, 250 Emmys, 60 DGA and 150 WGA wins between them, the growing collective of successful STORY attendees is becoming a Who’s Who of the filmmaking world.

McKee’s show-running alumni have created, written and/or directed award-winning series’ such as: Westworld, The Knick, The Affair, Downton Abbey, The Sopranos, Breaking Bad, Vikings, Game of Thrones, The Office, Fawlty Towers and many more.

WHAT CAN YOU EXPECT FROM THE STORY SEMINAR?

Story is about principles, not rules. This intense 3 day seminar gives you a deep dive into the complexities of classic story design, covering topics such as:

“Presented with such urgency and power, Robert McKee teaches us about life, death and the human heart.”
–THE INDEPENDENT

“Robert McKee is the genuine article. His ‘Story’ is a testimony of craft, compassion and depth.”
– Brian Cox, Emmy Award-Winner: Adaptation, Red Zodiac, The Bourne Identity

“Robert McKee is a master of the craft and a servant to the art of screenwriting.”
– Russell Brand: Get Him to the Greek, Forgetting Sarah Marshall

The 2016 standard was as high as ever, and the quality and range of opportunities almost overwhelming. I will definitely be attending next year."