I have returned from the London Screenwriters’ Festival and I have much to share.

After nearly 20 hours of screenwriting seminars, screenwriter interviews, and panel discussions, I have collected enough gold nuggets to excite a Bond villain, and over the coming days you can expect a steady stream of writing craft tips, screenplay trivia, and industry anecdotes.

My first report from the London Screenwriters’ Festival covers a Q&A session with screenwriter TIMOTHY HARRIS. Along with his long-term co-writer Herschel Weingrod, Timothy has penned a series of iconic Hollywood comedies, including ‘Brewster’s Millions’, ‘Twins’, and the jewel in the crown, ‘Trading Places’, a film I would argue is one of the finest comedies to ever come out of tinsel town, and was rightly the main focus of the questions.

Timothy was a taciturn tower of a man with a glint in his eye. Each of his considered answers was carved from solid wisdom. Space does not allow for a full rundown of the two hour chat, so instead let me present to you my top 5 gold nuggets of information learnt during the session… 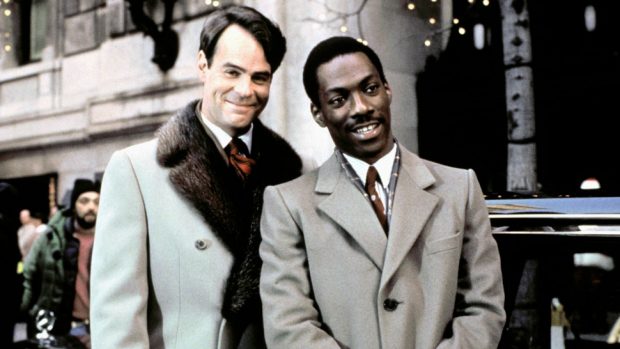 1) Timothy’s top five rules for comedy? Rule 1: There are no rules. If it makes you laugh, you are half way there.

2) Writing success came to Timothy early, but it came hard – he had a thriller novel published while at university, then waited for nine years to get his second novel published. By the time he was in his 30s, his friends all had careers but he was still doing odd-jobs to keep the writing going (Amen brother). When it comes to his writing process, he is ‘religious’ about it. For him it is an all consuming enterprise – he can’t just write for a few hours and then do other things. He tries to get some exercise in there, but otherwise he will spend morning noon and night obsessing over a draft until it is done. If he gets stuck he’ll find another human being to bounce off – in just articulating the problem he often finds the solution presents itself.

3) The idea for ‘Trading Places’ came from two brothers that Timothy played tennis with. They had an intense sibling rivalry, taking opposite views on any topic, and despite huge personal wealth would bicker over the 25 cent court hire cost. It is from enduring this behaviour that he hatched the idea of the Duke brothers, and the one dollar bet that would instigate the story. He originally wanted the film to be called ‘Scientific American’. He acknowledges he is no good at titles.

4) Writing ‘Trading Places’ was a fast and surprisingly simple process that involved no outlining (Timothy doesn’t like them) and only a couple of drafts. Timothy and his writing partner Herschel would start the day each writing their own version of the same scene, exchange them for critique, combine the best bits into an uber version, and then Timothy would type out the written pages in the evening with a cocktail.

5) Back in 1983, the only bankable white and black duo that studio’s were comfortable with was Gene Wilder and Richard Pryor, but Gene Wilder was seemingly mortally offended by Timothy and director John Landis when they rejected his idea that Winthorpe be phobic of touching other humans. Which led to the writer/director duo approaching Eddie Murphy, who at the time was seen as “just a TV guy”. Hearing his tell-tale laugh as they neared his trailer on the set of ’48 hrs’, the duo entered to find him reading the ‘Trading Places’ script. His opening greet: “This is some funny shit.” Despite Eddie’s verdict, and the film being green-lit for production, John Landis got last minute notes from a top Paramount executive complaining that there were no laughs in the opening 50 pages and demanding that the script be extensively rewritten. Landis screwed the notes into a ball and threw them into the bin. Now that’s what I call a director.

That’s it for my time with Timothy Harris. Hope you treasure the nuggets and are ready for more, because on Friday I’ll be handing you another five from an extensive interview with the film producer legend ROBYN SLOVO.

You can get £30 off your pass with the code

Some absolute standout sessions for me and not one duff one – now that is a hell of an achievement!"