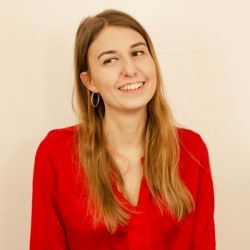 Growing up between France and the Netherlands, Alizée developed a passion for multicultural stories at a young age. After studying Film Production at the Arts University Bournemouth (UK) and FAMU Prague (Czechia), she graduated with an MA in Creative and Cultural Entrepreneurship from Goldsmiths University London. From there, she started reading scripts for international competitions and production companies including A Thousand Films in partnership with Sid Gentle, and Entertainment One among others. In 2017, she joined Euroscript as a script editor while working with independent companies on a freelance basis. Most recently, she script edited an animated TV series for Nucco Brain Studio and is currently script editing a live action feature film in development. Overall, she has worked across the film, TV, animation, and web content sectors. In 2019, she was a jury member of the BAFTA Children’s Awards.

Outside the script development world, Alizée also writes prose and is currently working on a first novel. In 2016, one of her short stories has been long-listed for the Borders – Penguin Random House Short Story Competition. When not writing, you will most likely find her country hopping, brainstorming new initiatives, or learning foreign languages.