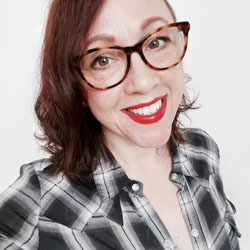 She currently has three comedy script options, and is working with comedy director legend Tristram Shapeero on several new projects. She also has two short films in pre-production and is currently directing a table read of her new comedy script Riot Grrrls.

Amanda specialises in rebellious, irreverent, female leads going against nonsensical power structures. As someone with autism (and mother of a son with autism), she’s also extremely passionate about disability themes, and advocates and consults on disability issues.

She’s also a script editor, having worked on 56 short, pilot and feature scripts in 2020-21. Amanda is also the student-chosen Outstanding Lecturer for School of Arts at University of Bolton where she teaches TV and film students.

Amanda Graham is appearing at the following sessions:

Successful Networking in 2021 For The Chronically Reluctant with Amanda Graham