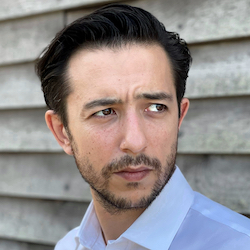 Amory Leader works at Big Book Media Ltd as a Producer and Development Executive for feature films, as well as offering script and story consultancy services for writers and producers. Amory’s recent credits include BLINDED BY THE LIGHT and ALL THE DEVILS MEN.

Amory began his career in film working in the servicing department of Capitol Films, Europe’s largest independent sales agency at the time, dealing with such titles as Sidney Lumet’s BEFORE THE DEVIL KNOWS YOUR DEAD, Robert Altman’s Oscar winning GOSFORD PARK and Paul McGuigan’s LUCKY NUMBER SLEVIN. It was at Capitol Films that Amory first began to read scripts and provide coverage for the company’s productions.

He has recently been working with Gurinder Chadha OBE (dir. Bend It Like Beckham) in several roles including Script Consultant on ITV’s BEECHAM HOUSE (Best TV Drama 2021, National Film Awards) and as Music Editor on BLINDED BY THE LIGHT (New Line Cinema) where he worked with Sony Music to incorporate Bruce Springsteen’s music onto the soundtrack of the film.

He is currently developing a new slate of genre films for Big Book Media, starting with UNSUNG (dir. Chris Turner) set for production 2022.

The legal team was helpful and encouraging and gave me some excellent advice as to how to protect my TV series idea."