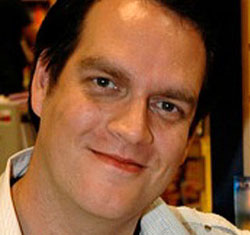 Andy is a screenwriter, graphic novelist, author and conservationist – writing on movie projects such as Judge Dredd and Freddy Vs Jason and Foreverman for Paramount Pictures, Spiderman creator Stan Lee and legendary producer Robert Evans. He has worked on TV projects for Syfy, Netflix, ITV and Amazon and is working extensively between the UK, US and China.

Andy went on to work on Warner Bros.’ animated Aquaman – while at the same time landing an eight-book deal with Oxford University Press for Hero.com“ and Villain.net. His comics and graphic novels include Madison Dark, Ritual and Dinocorps.

He has rebooted the classic character Tarzan, with a series of contemporary books Tarzan: The Greystoke Legacy, Tarzan: The Jungle Warrior and Tarzan: The Savage Lands. His latest series of middle grade novels – The Inventory – is published by Scholastic.

I got so much out of it. I’m still buzzing. I’ve already signed up for next year!"