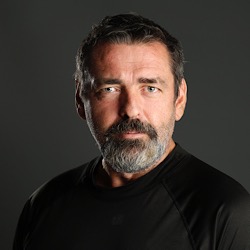 Born in Glasgow, Scotland, Angus Macfadyen attended the prestigious Central School of Speech and Drama in London. He easily found work on stage and screen, quickly gaining international acclaim for his tour-de-force performance as Robert The Bruce in the Oscar-winning film, Braveheart.

Over the course of his career, Angus has appeared in dozens of feature films and television shows. His incredible range as an actor has led to roles with some of the greatest talents in Hollywood, including starring roles in projects such as Divine Secrets of the Ya-Ya Sisterhood opposite Sandra Bullock, Equilibrium with Christian Bale, Julie Taymor’s Titus with Anthony Hopkins, and Tim Robbins’ Cradle Will Rock. He also performed on stage, starring in Medea opposite Annette Bening.

In recent years, he had a role in We Bought A Zoo, written and directed by Academy Award-Winner Cameron Crowe, and three seasons as a series regular on AMC’s TURN. Macfadyen also had his directorial debut with Macbeth Unhinged, a modern-day telling of Shakespeare’s Macbeth, for which he wrote the adapted screenplay and stars in as well.

He had a strong role in The Lost City of Z, directed by James Gray, with Charlie Hunnam, Sienna Miller, and Tom Holland for Plan B, and most recently, a recurring role on the CBS TV series, Strange Angel, created by Mark Heyman for Scott Free Productions.

In addition to Strange Angel, he currently has a starring role in Robert the Bruce, opposite Jared Harris, Zack McGowan and Anna Hutchison, directed by Richard Gray. He also co-wrote the script and is one of the producers. The movie will be hitting theaters in the US in April, 2020.

Angus Macfadyen is appearing at the following sessions: