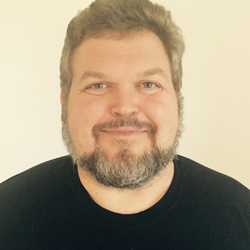 Bob Schultz has spent more than a decade as a screenwriter, producer, screenwriting professor, and organizer of more than 25 screenwriting conferences in Canada, the USA, and the UK. He has taught screenwriting, pitching, story structure, and independent producing in a dozen countries around the world.

Having written two produced screenplays (and produced four films), Bob’s latest project, Hitlersaurus! is being developed as a graphic novel.

In 2020, Bob will continue teaching students in the UK, Sweden, the USA, and Romania (so far!), as well as developing several projects as writer and producer. Yet he will always make time to visit the cinema, whether it is to see “Parasite” or “Fast & Furious 9.” Loving movies is the most important part of making movies.

The latest iteration of his First Draft Intensive launches in May.

Bob Schultz is appearing at the following sessions:

"The best piece of advice I got during the festival was ‘don’t give up’. I feel like I am not alone in the wilderness anymore."