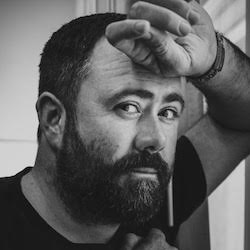 Celyn Jones is a critically acclaimed screenwriter and BAFTA winning actor from Wales. He is also the co-founder of Mad as Birds Films which is fast becoming one of the most prolific, dynamic and ambitious independent production companies outside of London.

He has written the screenplays for the Dylan Thomas biopic Set Fire to the Stars (Elijah Wood, Kelly Reilly), the psychological thriller The Vanishing (Peter Mullan, Gerard Butler) the period thriller Six Minutes to Midnight (Eddie Izzard, Judi Dench, Jim Broadbent) and the drama Almond and the Seahorse (Rebel Wilson, Charlotte Gainsbourg, Trine Dyrholm) which is currently in post-production and also his directorial debut.

His next screenplays The Corrupt (a western directed by Kristoffer Nyholm) and The Night Guest (elevated thriller directed by Celyn) are currently casting and heading towards late 2021/early 2022 shoots.

Celyn is a Welsh ambassador for the BFI young persons charity Into Film and a patron of Theatr Colwyn Cinema.