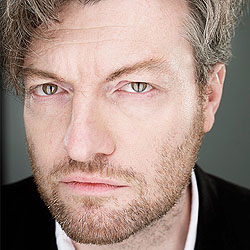 Charlie Brooker has worked across the spectrum of media, as a writer, producer, journalist, cartoonist and television and radio presenter.

In 2011/12 Charlie created two series of Black Mirror on Channel 4, single dramas set in the  area between delight and discomfort  that characterises the world of technology.

Charlie is creator of TVGoHome, the hugely successful satirical website, which was turned into a book by Fourth Estate and a sketch show for Channel 4.  Also borne out of the website was the Channel 4 cult comedy drama, Nathan Barley, which Charlie co-wrote with Chris Morris.  Other TV writing credits include Dead Set and the Brass Eye Paedophilia Special.

As a journalist, Charlie is well-known for his weekly columns in The Guardian.

This is the most intense meeting of the teachers and learners. The access to top-line teaching talent is unprecedented."