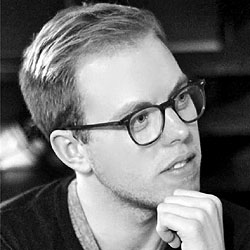 Chris Hill is a graduate of the MA Screenwriting Programme at the NFTS and studied Mathematics at Warwick University.

While still a student at the NFTS he was commissioned by Chris Curling to re-write the World War II biopic drama, White Rose.

Following the completion of his MA, he was picked up as one of four writers on the EON Screenwriters’ Workshop. He has also been part of the Skins writing team.

His other credits include working for director Michael Hoffman as a script consultant on The Last Station, which won the Hessian Film Award for Best International Literature Adaptation and went on to be nominated for two Oscars.

Rules of the Game, his first feature screenplay, completed shooting this July in Argentina with a cast which includes Charlie Bewley (Like Crazy) and Jack Doolan (Cemetery Junction).