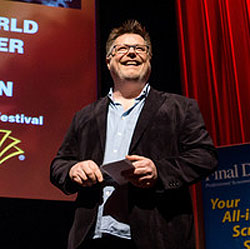 In 2009, Chris made the multi-award-winning and Oscar®-shortlisted Gone Fishing.

Chris is also the director of the London Screenwriters’ Festival and mutliple other screenwriting and filmmaking festivals, events and workshops. He founded TEDxEaling and has acted as exec on many other films. He also setup Create50 that has since made one feature film, and published four books, all by new entrants to the industry. Most successful has been the Twisted50 series.

Check out his blog at www.ChrisJonesBlog.com.

Chris Jones is appearing at the following sessions:

Welcome Back from Hibernation! It’s time to kick off the LIVE portion of the London Screenwriters’ Festival in style.

Join the team for the FABULOUS close of the festival and our promise for the next year ahead.

"LSF has created a supportive community for learning from other successful screenwriters and finding out how to break into the industry."