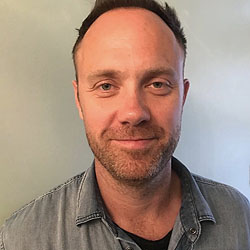 Chris Stott is the creator and executive producer of The Mash Report. He has been developing scripted comedy and entertainment TV shows for various comedians for the last six years with mixed results.

Before that he spent three years producing comedy sketches for the largely ignored website, Channelbee, which was closed after wasting several million pounds of Simon Fuller’s money.

LSF has grown to be the single most important screenwriting event on this side of the pond. An amazing three days that keep me motivated to keep on writing."