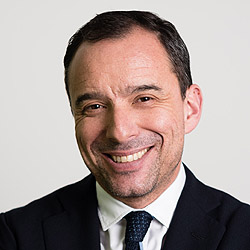 Christian Vesper is the EVP and Creative Director, Global Drama at FremantleMedia. He reports to FremantleMedia’s Director of Global Drama, Sarah Doole, and maintains a base in both London and New York. In his role Christian works closely with FremantleMedia’s production companies as a development partner with a focus on bolstering the international scripted development slate. He also cultivates his own projects within the company.  The position provides Christian with a platform to connect leading international writers, producers, directors and actors with FremantleMedia’s production teams to develop scripted programming of the highest calibre.

Christian is a highly experienced media executive with a track record in identifying projects with broad international appeal and developing highly successful partnerships. Prior to joining FremantleMedia, he spent 14 years at Sundance TV, most recently overseeing all international projects for the network, spearheading premier co-production partnerships for SundanceTV. His credits include The Last Panthers, with Sky Atlantic and CANAL+; Rebellion, with Zodiak Rights, RTÉ and Touchpaper TV; The A Word, with BBC One and Keshet and the critically acclaimed Deutschland 83 with UFA Fiction and FremantleMedia.

As senior vice president of scripted development and current programming at the network he was instrumental in the development and production of the first three seasons of Peabody Award-winning Rectify, and oversaw the development and production of the first season of Hap and Leonard, the highest rated original series in Sundance TV history. He also oversaw the Golden Globe® Award-winning mini-series The Honorable Woman as well as the Golden Globe® and Emmy® Award-winning mini-series Top of the Lake, the second season on which, Vesper will act as executive producer for Sundance TV.  His other achievements include Golden Globe®-winning Carlos; the critically acclaimed Appropriate Adult and Restless and the acquisition of hundreds of titles across a range of genres, such as Jean Xavier de Lestrade’s The Staircase; Loic Pringent’s Marc Jacobs, Michael Winterbottom’s In This World and Peter Bogdonavich’s Runnin’ Down a Dream. Christian was also executive producer of David Cross’ The Increasingly Poor Decisions of Todd Margaret.