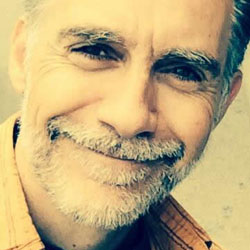 Daniel is a screenwriter with a passion for dark thrillers, crime stories and comic books. He’s a classically trained actor and studied screenwriting in New York. These days he works with some of  Germany’s best networks, producers, directors and actors, Daniel has been busy creating top-rated TV movies. His work has been Grimme Prize-nominated (Germany’s top TV honor). Daniel has also worked on action and thriller TV shows, creating bibles and writing episodes.

Before becoming a screenwriter, Daniel was in the army, protected the Pope in the Vatican, got shot at for the UN in Beirut, narrowly avoided a kidnapping in Tehran and escaped the war in Baghdad. Perhaps this is where he got his passion for crime thrillers from!

More recently Daniel has been focusing on adaptations. He adapted The Coffee Trader by David Liss and two of Craig Russell’s bestselling thrillers, Brother Grimm and Blood Eagle. Work continues on adapting Russell’s next novels in the series.