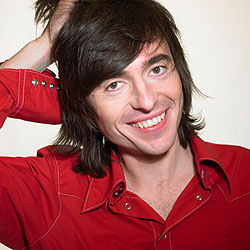 Danny co-created Rudy’s Rare Records with Lenny Henry and wrote four series of it for BBC Radio 4. He has written a wide variety of other Radio 4 programmes, including the Sony Award-nominated The Museum of Everything, three series of Paperback Hell and Danny Robins Music Therapy, as well as contributing to sketch shows such as Dead Ringers, The Hudson and Pepperdine Show and The Way It Is. Most recently he created, wrote and appeared in new sitcom The Cold Swedish Winter (“A sweet Richard Curtis-ish delight: the kind of thing you could imagine transferring effortlessly to TV” – The Guardian).

For TV, he has created the hugely successful BBC children’s series Young Dracula, which won a BAFTA and an RTS Award, the cult BBC 2 series We Are History and the recent BBC1 Comedy Playhouse sitcom Monks. He has worked on a host of other shows including Basil Brush, Mock the Week, This is Genius and According to Bex, and written for the likes of Ronnie Barker, Armando Iannucci, David Frost and Joan Rivers.

For the stage, as well as Rudy’s Rare Records, Danny has written and performed many Edinburgh Festival shows, including the acclaimed DJ Danny and Live Ghost Hunt.

He has presented various programmes for TV and Radio, including Let’s Make a Baby for BBC 3’s Mischief strand, The Bullsh*t Detective, BBC2’s The Culture Show and Newsnight’s election coverage.

Danny has a strong interest in music. He has been a regular contributor to BBC 6Music and won a Radio Academy Award in May 2014 for his documentary Johnny Cash and the Forgotten Prison Blues. He once had a Number 11 hit single and came second in the UK Air Guitar Championship Final – he was robbed.