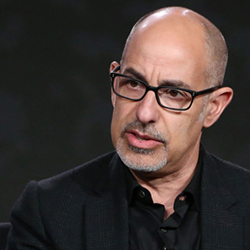 On his way to becoming a homicide detective, David S. Goyer decided to ditch police work in favor of Hollywood after being inspired by a Lawrence Kasdan speech. He transfered to USC and hasn’t looked back since.

Suffering the indignities of a Hollywood intern (including having bagels thrown at him, he sold his first screenplay, Death Warrant, to MGM. A few months after that, the script was turned into a vehicle for Jean-Claude Van Damme and the rest is history.

Blade soon followed, and Dark City after that. On the strength of Blade (and another project called Zig Zag), Christopher Nolan came calling to write Batman Begins. Then The Dark Knight, and Man of Steel.

David S. Goyer is appearing at the following sessions:

When Christopher Nolan was given Batman, there was only one man to call: David S. Goyer. Get inspired by the man who has come from humble beginnings to put the words “Why so serious?” into Heath Ledger’s mouth.