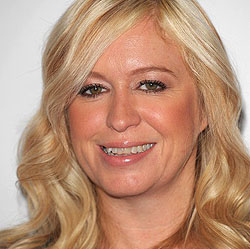 Debbie originally trained as an actor but was heralded as ‘the future of British Theatre’ (The Guardian) when she wrote and directed a series of award-winning black comedies that took the Edinburgh Festival by storm. She spent her youth touring the world with her internationally renowned theatre company, Snarling Beasties and Debbie’s play The Woman Who Cooked Her Husband is still performed all over the world.

More recently, Debbie has become better known as a filmmaker, creating a stir with her debut feature film Nasty Neighbours starring Ricky Tomlinson. In 2004 Debbie won a prestigious BAFTA award for her Channel 4 adaptation of The Illustrated Mum by Jacqueline Wilson.

Debbie went on to make the smash hit improvised comedy feature, Confetti (Fox Searchlight 2006), which was nominated for a British Comedy Award and starred a host of British comedy talent. In 2009, Debbie released her improvised Christmas comedy feature film, Nativity! Starring Martin Freeman, which won two Richard Attenborough Film awards and was nominated for best breakthrough movie at the National Movie Awards 2009.  Her follow up Nativity 2: Danger in the Manger starring David Tennant was released in 2012 and became the top cinema release of the season. Debbie’s third film in the franchise Nativity 3 “Dude, where’s my donkey?!” starring Martin Clunes and Catherine Tate is out in cinemas on November 14th.

Debbie’s third film in the franchise Nativity 3 “Dude, where’s my donkey?!”starring Martin Clunes and Catherine Tate was released in cinemas in 2014. This was followed by Nativity Rocks! starring Craig Revel Horwood and Ruth Jones which was released in cinemas in 2018. Debbie directed her first TV comedy-drama Love and Marriage for ITV starring Alison Steadman, Celia Imrie and Larry Lamb.

Debbie co-wrote all of the original songs in the Nativity movies and went on to adapt the first Nativity! into a full blown musical for the West End stage. It has had three sell out Christmas seasons and looks forward to a revival in 2022.

Debbie is currently in prep on a musical movie set in a high school which is due to start shooting at the end of this year.

Debbie Isitt is appearing at the following sessions:

Meet the BAFTA and EMMY award-winning filmmaker who has brightened up our Christmases with her four fun-packed, nativity-themed films: “Nativity” starring Martin Freeman (2009).