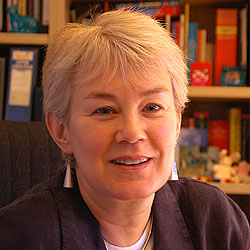 Elly is a multi-award winning writer who’s been writing tv for young people since the mid-80’s. (She’s also written a couple of books and plays along the way.)  Elly developed and was Lead Writer on The Story of Tracy Beaker (series one).  She also helped develop and was Lead Writer on Tracy Beaker Returns (three series, the first two with Ben Ward) and the first two series of The Dumping Ground.

Elly’s currently developing an original drama series for Island Pictures and an original animated sit-com with Ben Ward for CBBC.