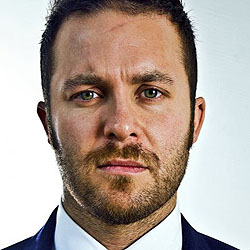 Eran Creevy grew up loving movies working in his Dad’s video shop, drawing comics, photocopying them and selling them to kids in his neighbourhood. He began his career in the film industry as a runner in post production and subsequently as an assistant director on a number of movies. These roles included working as a runner on films such as Layer Cake, Wimbledon, Bridget Jones 2 and Charlie and the Chocolate Factory and as a set assistant for Woody Allen.

When the opportunity to direct his first music video came along Eran jumped at the opportunity resulting in This is Real, for Asher D. With Rory Aitken and Ben Pugh producing through their company Between the Eyes, Eran directed music videos for Riz MC (who as Riz Ahmed later starred in Shifty) the Ministry of Sound, the Utah Saints, and Take That among many others. Music videos led on to commercials for brands including Coca–‐Cola and Nike.

Eran, however, was obsessed with movies and focused on writing Shifty, his first screenplay which was subsequently selected for the Film London Microwave scheme. Shifty, was critically very well received and nominated for 5 British Independent Film Awards in 2008 and Eran was nominated for a BAFTA in the category of Best Debut by a British Filmmaker. Eran also won best screenplay and the bronze horse at the Stockholm Film Festival and the WGGB best screenplay by a newcomer award. Shifty played at the London Film Festival 2008 and was released theatrically in the UK by Metrodome in April 2009. Shifty has made a number of international sales including a recent sale in the US.

Eran then directed Collide in 2014 an action movie starring Nicholas Hoult, Felicty Jones, Ben Kingsley and Anthony Hopkins, the project was again produced by Ben Pugh and Rory Aitken under the new management and production company 42, and executive produced by legendary producer Joel Silver. The film was released by Open Road in the US in 2016.

Eran most recently re-wrote The Killer for John Woo, with Mark Gordon (Saving Private Ryan, Molly’s Game) producing. The film is a reimagining of Woo’s 1989 Hong Kong classic, set to be directed by John Woo and starring Luptia Nyong’o. Eran is also currently completing writing a sister movie to Shifty entitled The Bright Side which is set to film towards the end of this year.