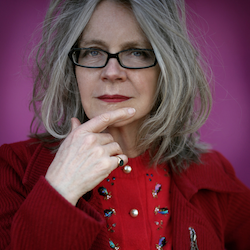 She’s written jokes for BBC Radio 4 sketch shows and screenplays for a BBC 1 soap (Doctors), had radio plays broadcast on LBC and won an IRDP award for her radio play CUFFEE’S REWARD about the Antiguan slave uprising of 1736.

She’s a founder member of Euroscript Ltd, one of the UK’s longest-running screenwriting training organisations, and runs its annual story competition.