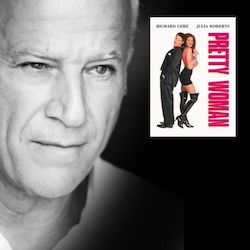 An award-winning film producer, Gary Goldstein has produced some of Hollywood’s biggest box-office hits, including Pretty Woman, Under Siege, The Mothman Prophecies, and cult fan favorite Cannibal Women in the Avocado Jungle of Death. His films have generated over $1 Billion Dollars in worldwide revenue, and received multiple Academy Award nominations, People’s Choice Awards and a Golden Globe, among other honors. Pretty Woman went on to become the highest grossing live-action film in Disney’s history.

As a storyteller and strategist, Gary produces businesses very much in the same way he’s produced films. He selectively consults and/or sits on the advisory board of startups and mature companies, ranging across media, entertainment, technology, health and social impact. Gary admits a special affinity with and passion for entrepreneurs, makers and founders, as well as for service-oriented or humanitarian endeavours.

Gary W. Goldstein is appearing at the following sessions:

Hollywood producer and worldwide inspiration Gary Goldstein is back to strengthen you as a creative mastermind – not just a writer.