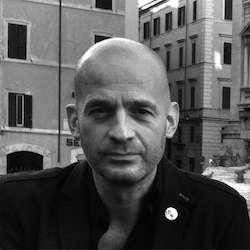 Gerardo of Italian parentage, studied and speaks the language too; originally trained as an actor at Mountview Theatre Conservatoire in London and starred in the feature movie Amy Foster with Rachel Wiez and Vincent Perez directed by Beeban Kidron.

He also worked in the operatic theatres English National Opera and the Royal Opera House with Director Francesca Zambello and Sir Jonanthan Miller and played the protagonist at the English theatre of Hamburg in the play Birthday Suit.

After being featured as a photographer for The Lonely Planet, Gerardo found his passion lay in directing so he studied directing at Raindance.

Gerardo’s last project took him to Kenya where he directed and produced a documentary in collaboration with the charity Tarantula Rubra where the children of the Apulia region would learn the cultures and traditions of Kenyan orphans and vice versa. A story of solidarity and understanding.

Gerardo is now raising funds for his debut feature <Cizio> which will be filmed in the region of Apulia, Italy.