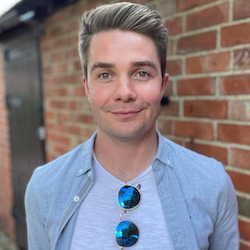 Greer Ellison is an award-winning writer from Northern Ireland. His debut feature film, ‘Butterfly Kisses’, developed by Film London and BBC Films, premiered at the Berlin Film Festival where it won the Crystal Bear for Best Film and another 10 awards internationally. His second feature film, ‘A Woman at Night’, will be released October 2021.

In 2019 Greer won a place on the BBC Writersroom and is currently developing an original television series with Hartswood Films and the BBC. He has been commissioned and produced by BBC Radio 3, and BBC Sounds for two original audio dramas.

Greer won the Cinestory Screenwriting competition in L.A, the Film London IPF in New York, was a finalist in the Sundance Screenwriting Lab and the Film London Microwave Scheme. Most recently his feature film script ‘Aliya’, which he co-wrote, received the ‘Special Mention’ award in the Midpoint Development Lab 2021.

What we are looking for:

FIlm scripts that have a clear and strong genre, but find an interesting and original way to attack the space. We look at projects at various stages of packaging and are open to developing from conception or forming co-productions on more advanced projects/packages.