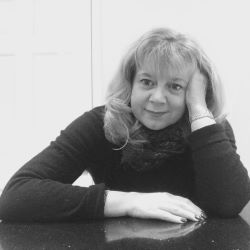 Helen was born and raised in Pontefract West Yorkshire.

She ignored everyone’s advice, studied law at Hull university and practised as a solicitor for ten years. She quickly built a loyal following of teens in care who drove her crackers, made her laugh and nicked all the biscuits.

In 2003 she wrote a novel for a bit of fun. The main character Lilly Valentine was, you guessed it, a northern lawyer representing children in the care system.

The novel was published in 2004 and a further six books in the series were released.

In 2016 Helen created a new female lead character; a corporate lawyer turned career criminal. The first book in the series Taking Liberties was published in 2017, the second Bang to Rights in 2018, the third Playing Dirty in 2019. The series was optioned, and Helen was commissioned to write the pilot Liberty.

Her script Galaxy won the Kudos North Award in 2018 and was optioned by Kudos North. They have since commissioned Helen on two further original ideas.

Helen wrote episode eight of Clink, the new C5 prison drama produced by LA Productions which aired earlier this year and has been commissioned by the BBC to co-write the pilot of Gimme Shelter, a BBC series on homelessness.

She has other original projects in development with BBC Studios, Endor Productions, and Snowed In.

Helen is represented by Frances Arnold at Rochelle Stevens & Co.