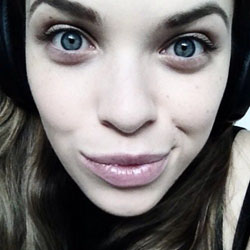 Holly Pickering is the Founder and Solo Developer of Indieful Entertainment and Co-Founder of feminist meetup group ‘LadyCADE’.

Holly started her career working on the Lego games at Traveller’s Tales as an artist. Keen to work on more emotive, narrative-focused projects, Holly moved into the indie scene where she worked on the narrative-puzzler Ether:One, along with a number of other freelance projects.

Holly is currently working on Indieful’s first game, Salt; a character-driven adventure about stalking on social networks. Though being Holly’s first official foray into story and mechanic design, her early demos have won her fans for her unique and quirky writing style.

I still can’t quite believe what I’ve lived through these last few days – totally amazing."