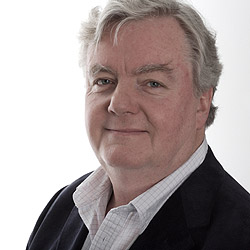 Born and raised in Glasgow, Iain Smith is a graduate of the London School of Film Technique, now known as The London Film School, where he is a Patron.

He is an established international film producer and recipient of a BAFTA for Outstanding Achievement in Film. He is CEO of Applecross Productions Ltd, and of Zaltman Films Ltd. based at Pinewood, and has many production credits including Chariots of Fire, Local Hero, The Killing Fields, The Mission, 1492-Conquest of Paradise, The Fifth Element, Entrapment, Children of Men, The Fountain, Spy Game, Alexander, Wanted and The A Team to name but a few. He has most recently completed shooting on Mad Max: Fury Road.

Below is a podcast we recorded with him at the London Breakfast Club.

"The genuine camaraderie with like minded artists and speakers uplifted my spirits in way no other place has. Thanks to all who made the dream possible."