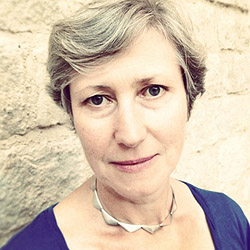 Isabelle Grey was a journalist and non-fiction author until commissioned by the BBC to write two pilot episodes of her own wartime medical drama series, when she fell in love with scriptwriting. She went on to contribute over thirty-five episodes to such series as The Bill, Wycliffe, Rosemary & Thyme and Midsomer Murders, and to further original drama commissions from Scottish TV, Carnival and Working Title TV. She also wrote the acclaimed BBC1/Discovery Channel docu-drama Genghis Khan.

‘Tina’s Story’, her episode of the award-winning BBC1 series Accused, co-written with Jimmy McGovern and starring Anna Maxwell Martin, Ewen Bremner, Robert Sheehan and John Bishop, was previewed in The Times as ‘the most moving and powerful drama on television in a long time’ and received several 5-star reviews.

Her novels of psychological suspense are published by Quercus. Her first, Out of Sight, described by the Irish Examiner as ‘clever, and utterly original’, is now in paperback.

She is also Writing Tutor on the MA Screen at Drama Centre, Central St Martin’s, London, guiding students through the writing of scripts for produced 10′ shorts as well as developing their original features.

Isabelle is currently writing a third novel and developing further ideas for television. She is represented by Sheila Crowley at Curtis Brown.