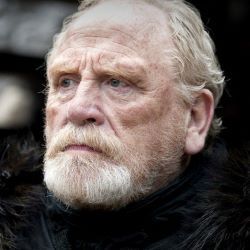 James Cosmo is a Scottish actor best known for his roles in films such as Highlander, Braveheart, Trainspotting, Troy, The Chronicles of Narnia: The Lion, the Witch and the Wardrobe, Ben-Hur and Wonder Woman, as well as television series such as Game of Thrones, Sons of Anarchy, His Dark Materials and The Durrells.

He appeared in Troy with future Game of Thrones fellow cast members Sean Bean and Julian Glover and as Lieutenant-Colonel Philip Drysdale in the seventh series of Soldier Soldier. He was also fortunate to have worked with Heath Ledger in The Four Feathers.

From 2016 to 2019, James further played the memorable Captain Creech in ITV’s The Durrells, which aired on PBS in the States, but perhaps most notably portrayed Jeor Mormont, Lord Commander of the Night’s Watch, in the HBO series Game of Thrones.

James attended the Royal Scottish Academy of Music and Dramatic Art and Bristol Old Vic drama school and in 2018, he was awarded the MBE (Member of the Order of the British Empire) in the Queen’s New Year’s Honours List for his services to Drama.

James Cosmo MBE is appearing at the following sessions: