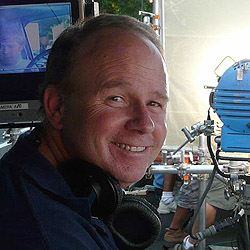 Jeb Stuart has been a motion picture and television screenwriter, director and producer for over 30 years and is considered one of the great action screenwriters in film history. His first film, Die Hard was nominated for 4 Academy Awards and voted the Best Action Film of All Time by Entertainment Weekly (2007). In and 2012 New York Times Magazine article, Adam Sternbergh wrote: “as a genre, the American action film… produced one bona fide masterpiece, Die Hard.” In 1993 Stuart’s suspense thriller, The Fugitive, was nominated for 7 Academy Awards including Best Picture.

During his career he has worked on over 50 feature projects, which have collectively grossed over $2.5 billion dollars worldwide. Stuart is a WGA Best Screenplay Nominee as well as a two-time Edgar Allen Poe nominee for best movie screenplay. He has received recognition for his writing from the American Film Institute and is a recipient of the Nicholl Screenwriting Fellowship, administered by the Academy of Motion Picture Arts and Sciences, of which he has been a member for the last 24 years.

In 2010, his film, Blood Done Sign My Name, starting Nate Parker, was chosen to open the Pan African Film Festival and received the 2010 Wilbur Award given annually by the Religious Communications Council. He has just finished writing The Liberator, an eight-part World War Two mini-series for A&E based on a book by Alex Kershaw and is currently developing False Flag, a dramatic television series for FOX. Stuart received a B.A. and M.A. from the University of North Carolina at Chapel Hill and a M.A. in Communications from Stanford University.