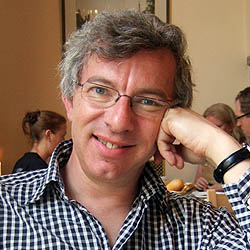 Jeremy Howe is the Commissioning Editor for Drama & Fiction at BBC Radio 4; he is responsible for commissioning over 300 titles a year including The Archers, the Book at Bedtime and all the drama on Radio 4, where there are more commissioned single dramas broadcast than all other BBC TV & Radio networks combined.

Before joining Radio 4 he was an executive producer for BBC Bristol working across both radio and TV. He series produced BBC2’s 10×10 New Directors (giving breaks to directors like Joe Wright, Sarah Gavron, Debbie Isitt and Andrea Arnold) and single films like The Falklands Play and This Little Life for BBC2.

In radio he set up a drama documentary unit in Bristol producing Lockerbie on Trial, The Aeneid, Doctor Finlay, and Naples ’44. His first book, mummydaddy, was published in 2011.