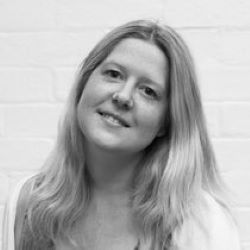 Jo became an Executive Producer at Carnival Films in 2019, after joining the team as Head of Development in 2016.

Jo trained as a Script Editor at the BBC, following a BA (Hons) in Screenwriting at Bournemouth University. She worked on the first series of BBC One’s Afternoon Plays, Merseybeat and Holby City, before joining Talkback Thames to script edit The Bill, where she became Senior Editor.

Jo’s development career began in 2007 when she joined Hat Trick Productions, where she was first Script Executive on a raft of shows and then Head of Drama Development.

Prior to joining Carnival, Jo was at Kudos productions, where she was Story Producer on The Tunnel: Sabotage in 2014 and then Head of Development.

Joanna Strevens is appearing at the following sessions:

I met some really interesting writers and will attend again next year."