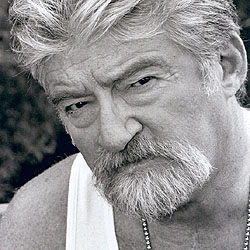 Joe Eszterhas is an American screenwriter and best-selling author.  Part Hollywood rebel and Hollywood insider; part romantic, cynic, and moralist, Eszterhas’ life reads like a movie itself.  Shortly after his birth,  Eszterhas and his parents were interned in refugee camps in Austria, first British then American.  At the age of six, he and his parents emigrated to America.  Here, he rose from being a refugee street kid in the back alleys of Cleveland, Ohio, to being arguably the most famous screenwriter in Hollywood history.

Eszterhas’ controversial story subjects and characters, along with his straightforward, bare-knuckle approach to Hollywood, has attracted worldwide acclaim as well as hostility from some critics and Hollywood insiders.

Early in his screenwriting career, Eszterhas rejected the traditional notion of black and white characters, making his subjects grey and complex mixtures of both.  In addition, his movies often centered on strong female leads  ― uncommon in movies of the day  ― resulting in box office hits such as Basic Instinct, Jagged Edge, and Flashdance as well as the critically-panned Showgirls, which evolved into a cult classic.  Overall, Eszterhas has sold nearly thirty screenplays, seventeen of which have been produced.  His movies have grossed more than one billion dollars at the box office.  He earned a record-breaking four million dollars to write a single script.

Daily Variety calls him “The Che Guevara of Screenwriters.”  The Los Angeles Times calls him “Hollywood’s rogue screenwriter” and Time magazine writes, “If Shakespeare were alive today, would his name be Joe Eszterhas?”

Eszterhas is also the author of two New York Times best-selling books — American Rhapsody and Hollywood Animal.  He was nominated for the National Book Award for his non-fiction novel Charlie Simpson’s Apocalypse.  Critics have praised his raw, honest, and hard-hitting style.   Christopher Buckley writes, in The New York Times Book Review about Eszterhas’s book Crossbearer, “Joe Eszterhas writes with his fists.  You practically duck as you turn the page.”

It is a style he honed during his early days as an award-winning reporter and columnist  at The Cleveland Plain Dealer.  He wrote stories about everything from the shootings at Kent State University to the story exposing the photographs taken by an Army photographer at the My Lai Massacre in Vietnam.  He was twice nominated for a Pulitzer Prize.

Eszterhas’ unconventional style ultimately led to an invitation to write for one of the most rebellious counterculture publications in American history: Rolling Stone Magazine, where he worked alongside ground-breaking  journalist Hunter S. Thompson and a young photographer named Annie Leibovitz.

Eszterhas’ other books include The Devil’s Guide to Screenwriting; Nark, a Tale of Terror; Thirteen Seconds, Confrontation at Kent State; and Heaven and Mel, a terrifying and darkly-humorous account of his aborted collaboration with Mel Gibson.

A practicing Catholic, Eszterhas has also written two films about anti-Semitism, Betrayed and Music Box.  After the release of Music Box, he was awarded The Emanuel Foundation’s Lifetime Achievement Award for writings about the Holocaust in Hungary.

He recently finished an original screenplay, Desire, for producer Scott Steindorf, who produced The Lincoln Lawyer.  He is currently at work on a novel.

Eszterhas lives in Bainbridge Township, Ohio with his wife Naomi — whom he calls “Sunlight” — and their four sons.

I felt like every single person I met gave me something that I needed to take me to the next step of my journey."