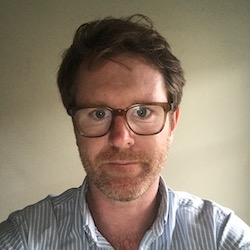 It was during his time as a founder member of ‘The Beta Band’, one of the most highly revered and respected bands of the last two decades, that John discovered his love of filmmaking. The creative brain behind many of their most iconic and groundbreaking music videos, he continued his impressive work as a promo director with his next band, ‘The Aliens’, before making his first dramatic work – Man on a Motorcycle – starring Michael Fassbender in 2009.

The film shot entirely on his mobile phone retains the ingenuity and distinct visual style of his promos with a blistering central performance by Fassbender at its core. It played at the London Film Festival to critical acclaim – Sight and Sound called it a “masterpiece”.

John’s debut feature Slow West was released theatrically in 2015. It went on to win multiple awards including the World Cinema Dramatic Competition at the Sundance Film Festival and the London Critics Breakthrough British filmmaker award for John.