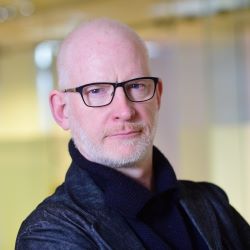 John Stevenson has over four decades of experience in film development and production. Most recently Stevenson directed Sherlock Gnomes for Paramount and MGM, a sequel to the 2011 hit Gnomeo and Juliet, and an animated twist on Sir Arthur Conan Doyle’s famous detective.

Starting off in Jim Henson’s puppet studios in London at age 19, Stevenson’s passion for storytelling has been at the core of every project he has worked on since.

Stevenson has lectured on the creative process of story development in China, Malaysia, Korea, Australia, and New Zealand and at schools such as USC; UCLA; Oklahoma Arts Institute; Ulster University of the Arts, Ireland; the University of Andong, Korea; and for companies such as Sony PlayStation, Lego, and Valve.

Prior to the release of Kung Fu Panda, Stevenson directed four episodes of the DreamWorks prime time television series Father of the Pride and held the post of Head of Story at PDI/DreamWorks serving as story artist for the DreamWorks worldwide blockbusters Shrek, Shrek 2 and Madagascar. While there, he also created storyboards for the animated features Spirit: Stallion of the Cimarron, and Sinbad: Legend of the Seven Seas. A core member of PDI/DreamWorks’ creative review committee, Stevenson had input on a variety of projects and also taught classes on the story process to artists at PDI and the San Francisco-based Wild Brain Productions.

The mid-to-late ’90s saw Stevenson working on multiple feature and television animation projects. He provided the lead voice for the pilot of the series Mr. Baby; designed characters for DreamWorks Television’s Toonsylvania; and worked as a storyboard artist and character designer for DreamWorks/PDI’s Antz, Pixar’s Toy Story 2, and Nickelodeon’s pilot Fathead. During this period, he also acted as an independent creative consultant to CBS, NBC, Walt Disney Productions, Colossal Pictures and Protozoa Pictures.  He worked with Henry Selick as head of story/creative development for Twitching Image, Inc., as puppeteer for the animatronic rhinoceros in Disney’s James and the Giant Peach (also drawing storyboards) and directed an episode of Film Roman/CBS’s The Twisted Tales of Felix the Cat.

As a staff Designer/Director for Colossal Pictures from ‘91 to ‘95, Stevenson worked in multiple capacities on the animated series Back to the Future and Moxy—Pirate TV Show; created advertising spots for Cheerios, Little Caesars and Parker Bros. and developed show formats and concepts for Nickelodeon/CBS.  He served as art director, character designer and storyboard artist on the Central Television series The Dreamstone.

His previous freelance career as an artist, illustrator, character designer and art director exposed him to projects in nearly every medium, working on theme parks, museums, album covers, commercials, and various feature films and television shows. Films included Little Shop of Horrors, Labyrinth, The Dark Crystal and The Great Muppet Caper. His career began in 1977 working with Jim Henson on The Muppet Show.

John Stevenson is appearing at the following sessions: