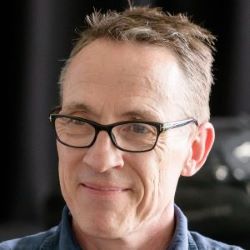 John Yorke is Managing Director of Angel Station where he works as a drama producer, consultant and lecturer on all forms of storytelling. A former MD of Company Pictures where he exec produced Wolf Hall, he’s the author of Into the Woods – the highly acclaimed book about how and why we tell stories.

As both Head of Channel Four Drama and Controller of BBC Drama Production John has worked on hugely popular shows such as Hustle, Spooks, Casualty and Holby City alongside award-winners such as Bodies, Omagh, Sex Traffic, Not Only But Always and The Curse of Steptoe.

His career began storylining EastEnders in its very first BAFTA-winning year – beginning a fourteen year association with the programme. As a commissioning Editor/Executive Producer, he championed Life On Mars, The Street, Shameless and Waterloo Road and in 2005 he created the BBC Writers Academy, a year-long in-depth training scheme which has produced a generation of successful television writers. He has also edited The Archers.

John is Visiting Professor of English Language and Literature at the University of Newcastle-upon-Tyne and lives and works in London.

"The depth and variety of talks from so many talented and passionate people was staggering. To also have access to those talks is immense."