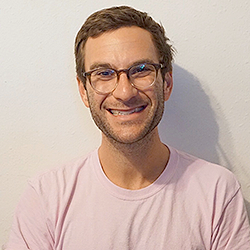 Jordan Rozansky is a comedy writer and producer from Miami, Florida. He worked in development for Ryan Reynolds’ film production company, Dark Trick Films, and Reynolds’ shared TV pod with Allan Loeb, DarkFire Television, working on creative notes, pitch preparation and joke punch-ups. Jordan then went to work for the Head of Talent at Anonymous Content, reading for and working closely with Samuel L. Jackson and Michael Keaton.

Jordan worked on The Tonight Show with Jay Leno and on sketch comedy pilots for MTV and History Channel. For two years, he wrote and produced a monthly live sketch show at iO West that played in the San Francisco Sketch Fest. Jordan’s favorite job was making Assassin Banana, a digital series about a superhero banana, starring voice work from Scarlett Johansson and Nathan Fillion. In 2017, he founded Night Beach Pictures with David Odio, his producing partner and director. Together they sold Janitors, a 10-episode dark comedy series. They’re currently working on a half-hour pilot.