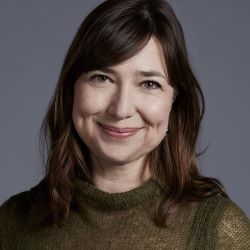 Karen is an accomplished executive producer who has spent the last six years overseeing Poldark and the Agatha Christies for Mammoth Screen. Before joining Mammoth she worked as an executive producer at Chorion, looking after the film, TV and stage exploitation of literary estates for writers including Agatha Christie, Georges Simenon, Enid Blyton and Raymond Chandler.

After filming finished on the first series of Poldark, she worked with Aidan Turner again on And Then There Were None, going on to work on The Witness for the Prosecution (BAFTA nominated and winner of the Broadcasting Press Guild award for Best Single Drama) with director Julian Jarrold, followed by the critically acclaimed Ordeal by Innocence, starring Eleanor Tomlinson and Bill Nighy – all of which were written by Sarah Phelps. She continues to work closely with Debbie Horsfield and Sarah Phelps on new developments at Mammoth.

Prior to this, Karen produced and executive produced over twenty Poirot and Marple films for ITV Studios, including the EMMY-nominated Curtain: Poirot’s Last Case.

She is currently executive producing Sir Christopher Hampton’s adaptation of JG Farrell’s The Singapore Grip for ITV, which was filmed on location in Malaysia last year.

Karen Thrussell is appearing at the following sessions: