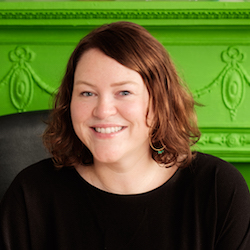 She is a member of IFTA, BAFTA, BIFA and the European Film Academy, and a former board member of Screen Ireland. She is also founder and co-creative director of X-Pollinator, a cross-disciplinary training initiative for female creative talent.

I'm finding it hard to get back down to Earth after such an inspirational three days."