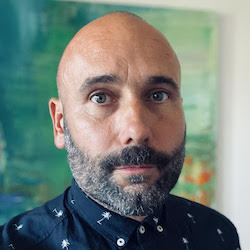 Keri Collins is a Welsh BAFTA winning writer/director for film and television.

Working across comedy and drama, Keri is currently writing a movie adaptation of family favourite SUPERGRAN, based on the the iconic 1980s British superhero book and TV series, for Sarah Brocklehurst Productions.

In 2018 he sold an original superhero comedy spec to an Emmy winning US production company.

In drama, he co-writes with Ahsan Naeem, and over the past twelve months they have set up a number of original drama/thrillers at BAFTA and Emmy winning production companies in the UK and Europe.

The film received multiple 4-star reviews, including from EMPIRE magazine and HeyUGuys.com. Mark Kermode described it as “a British Clerks” and it was theatrically released in the UK, then acquired by NETFLIX.

He has also directed many hours of TV, for the BBC, Sky and Fox.

Keri is represented by Alex Bloch at 42.