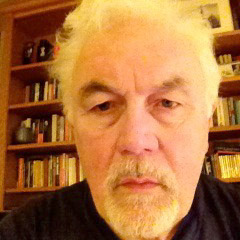 Kevin was born in the North East of England but now lives in Suffolk.  He was educated as a scientist and worked as a research biochemist at the National Institute for Medical Research

He has had plays produced at The Royal Court, Hampstead Theatre, and The Royal Exchange Manchester, including Beached, Astronomer’s Garden,  Sugar Hill Blues, Hammett’s Apprentice and So Special.

Kevin Hood’s first work for TV was Grange Hill for which he wrote more than 20 episodes.  For Channel Four he wrote the black comedy Work!, starring Jim Broadbent and the ITV series Medics.  For the BBC he wrote four episodes of the first series of the award-winning crime drama including the establishing story.  His extensive TV work includes a number of episodes of Eastenders, the BBC1 thriller The Echo starring Clive Owen, the epic 10-part period drama In A Land Of Plenty for BBC 2, and the adaptation of Tony Parsons’ book, Man And Boy starring Ioan Gruffudd, and Garrow’s Law.

He co-wrote the feature film Becoming Jane starring Anne Hathaway and James McAvoy.  Feature film work in development includes Reykjavik directed by Mike Newell starring Michael Douglas as Ronald Reagan, scheduled for production in 2013 and Girls Night Out for Ecosse Films, also scheduled for production in 2013.  Television work in development includes a series, Abel and Keane, for BBC and a serial, Olympics 1936.