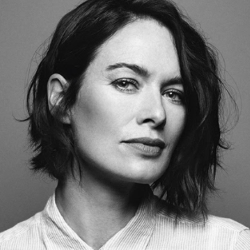 Emmy-nominated Lena Headey is best known for playing the lead role of Queen Cersei in HBO’s Game of Thrones, based upon the popular fantasy novels by George R.R. Martin; she is a multiple nominee for Golden Globes and Emmy Awards and for Best Supporting Actress in a Drama Series.

She also has a vast film career including leads in The Brothers Grimm, The Purge, Dredd and the 300 film franchise. Headey made her feature film debut in 1992’s Waterland before appearing in the award-winning Merchant-Ivory film The Remains of the Day.

Other recent film credits include Pride and Prejudice and Zombies, The Flood and Stephen Merchant’s Fighting with My Family alongside Florence Pugh, Vince Vaughn and Nick Frost. Most recently, her 2019 short film, The Trap, was nominated for a BAFTA for Best British Short.