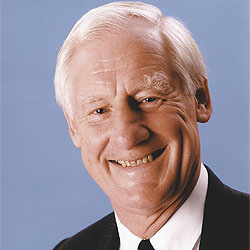 Frederick Edward Robin Butler, Baron Butler of Brockwell, KG, GCB, CVO, PC (born 3 January 1938) is a retired British civil servant, now sitting in the House of Lords as a life peer.  He is a member of the House of Lords Select Committee on EU Financial Affairs

He became the Master of University College, Oxford in 1998, and was made a life peer as Baron Butler of Brockwell, of Herne Hill in the London Borough of Lambeth in the 1998 New Year Honours List.  He was appointed a Knight of the Garter in 2003.