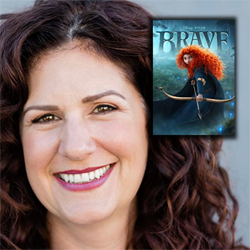 Screenwriter Lorien McKenna has set up TV projects at Hulu, NBC and Netflix. She was the Co-EP for the CURIOUS GEORGE TV series and the features and has developed several TV projects for Disney Jr. She also wrote the feature HOW TO SET A FIRE AND WHY, based on the book of the same name by Jesse Ball.

She co-hosts a podcast called The Screenwriting Life with Oscar-nominated writer Meg LeFauve.

McKenna is a former Story Manager at Pixar Animation Studios where she worked on the features UP, BRAVE, INSIDE OUT and THE GOOD DINOSAUR. She also served as the Associate Producer for Paramount Animation’s WONDER PARK.

After receiving her MFA in Creative Writing from St. Mary’s College, McKenna started her career as a playwright in the San Francisco Bay Area where she founded Guilty Theater.

McKenna is a mentor and Judge for Cinestory Foundation, Bric Foundation, Stage 32 and has been a story consultant for ReelFX Animation and Screen Australia.

She currently lives in Glendale, CA with her husband and daughter.

Lorien McKenna is appearing at the following sessions:

A Screenwriting Life… How to survive, thrive and find meaning in our work with Meg LeFauve and Lorien McKenna

Screenwriting success lives at the crossroads between heart, soul AND craft, savvy and experience. Join us at that crossroads for an inspirational and also practical session to connect us all with our WHY so we too can follow our own true path to success.