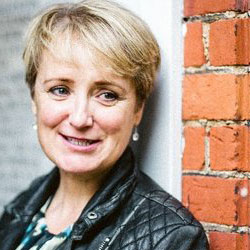 Lucy van Smit was a TV producer, who travelled worldwide for NBC News, flew on Air Force One with President Reagan, got surrounded by tanks at Manila airport in a coup, before she chilled and made documentaries for Canadian Broadcasting on writers, including John Le Carré, Martin Amis and Ian MacEwan.

Lucy is now an award-winning author herself. Her debut novel The Hurting was dubbed Teen Noir – a story about the power of attraction and the terrifying consequences of falling for the wrong boy, which leads an urban British teenager to kidnap a baby,  only to encounter wolves  in the Norwegian Fjords. Brought by JK Rowling’s publisher – the legendary Barry Cunningham and Chicken House Books – The Hurting is being translated into Russian, German and Polish. A former artist, screenwriter Lucy has an MA in creative writing. The Ritzy offered to screen her Live Until You Die made by networking at Talent Campus and the LSF last year, and with help from Eloise Lamb Lawrence at The BRIT School.

Lucy is repped by Sallyanne Sweeney at MMB Creative.